The $1 Billion #CRE Question – Can Soccer Be Successful in South Florida? 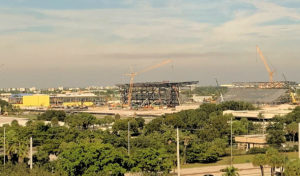 Major League Soccer is coming to South Florida much sooner than you think. And it is the centerpiece of one of the largest real estate deals ever proposed for South Florida. From the elevator of Levy Realty Advisors’ headquarters in Fort Lauderdale’s Spectrum Office Park, I can see a new $60 million soccer stadium take shape. The site of the recently demolished Lockhart Stadium and Fort Lauderdale Baseball Stadium will be the temporary home for Inter Miami CF. The new Major League Soccer (MLS) franchise will open their inaugural season here on March 14, 2020. Meanwhile, negotiations continue on the voter-approved 131-acre Miami Freedom Park; a $1 billion stadium, mall, hotel, technology hub and park proposed for the site of the Melreese Golf Course near Miami Airport. This would be the permanent home for the team starting in 2022. So the $1 billion question is:

Can pro soccer be successful in South Florida?
As a long-time South Florida sports fan, I was extremely skeptical. This may make you change your mind: 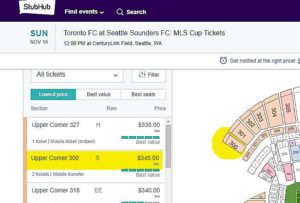 My son was in town from Seattle, where he has attended some Seattle Sounders MLS games and enjoyed the experience. We watched on ESPN as Seattle beat Los Angeles FC and earned a spot in the MLS Cup Championship. He thought it would be fun to attend the game and we went online to check on tickets. We found out that the Sounders sold out 70,000 seats in 20 minutes and the worst seats in the stadium were selling for $345 on StubHub. He decided to watch the game on TV and the Sounders wound up winning the championship in front of a raucous record crowd.

Soccer has definitely caught on in Seattle with an average attendance of over 40,000 per game. In Atlanta, in the football-crazed South, their MLS expansion team posted a winning record in its 2017 inaugural season. Atlanta United now leads the league in attendance at over 53,000. In addition, the culture is changing. Organized youth soccer was very rare when I was growing up in Miami. But my millennial kids and their friends all played  soccer and you can’t drive by a field these days without seeing a game going on. 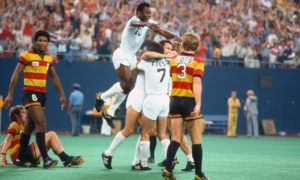 For professional soccer in South Florida it has been a rocky road. The Miami Toros started play in the North America Soccer League (NASL) in 1972 and became the Fort Lauderdale Strikers in 1977. I recall sitting in a loud and packed 15,000 seat Lockhart Stadium in the late 1970s as the Strikers posted the league’s best record. The Strikers and the NASL reached their peak in 1977 when Pelé and the New York Cosmos defeated the Strikers in the playoffs in front of 77,000 fans.   But attendance began to fade, the Strikers relocated to Minnesota and the NASL folded in 1984.  Major League Soccer (MLS) was formed in 1988 as a condition (quid pro quo?) for the US to host the 1994 World Cup.  South Florida’s potential as a pro soccer market is illustrated by a 2014 exhibition between the national teams of Brazil and Columbia which drew over 73,000 fans.

Another “friendly” between Brazil and Columbia draws 65,000 to Miami’s Hard Rock Stadium, September 6, 2019.

In 2014, a new group headed by Brazilian superstar Ronaldo purchased a new Strikers franchise hoping to elevate them to their past glory. I negotiated a lease with the team to lease 1,512 square feet for their corporate headquarters minutes from the old Lockhart Stadium.  But interest in the re-formed minor league NASL was limited and the deteriorating stadium proved to be a disaster. The team moved to Lauderhill and folded in 2017. At the same time, however, David Beckham began searching for a South Florida home for a new MLS franchise.

Rendering of the $60 million new Lockhart Stadium, scheduled for completion in time for Inter Miami CF’s opening game in March 2020.

Atlanta United has proven that you can quickly put a winning MLS soccer team on the field and develop a fan base. Beckham can draw from a worldwide talent pool and Miami’s multicultural community and abundant sunshine should prove attractive to players.  I believe the key lies in the organization. The Dolphins have always been king in this market. Despite some recent down years, they have consistently been one of the best managed and most successful franchises in the NFL.  The Miami Heat took the court in 1988. Mickey Arison has put together an organization and a culture that breeds success and has the championship banners and attendance to prove it. Meanwhile, the Miami Marlins have two championships, but poor management decisions have led to losing teams and anemic attendance. I personally enjoy Marlins Park and think it’s a great facility, but the team’s former owners walked away with all the profits and left Miami taxpayers holding the bag.

David Beckham and his group have billion dollar plans to bring big time soccer to South Florida. And local entrepreneur and co-owner Jorge Mas plans to finance Miami Freedom Park at no cost to taxpayers. Regardless of what happens with Melreese, which has some environmental issues to overcome, Inter Miami CF will take the field in March in Fort Lauderdale. If the Miami deal falls through, Fort Lauderdale could still become the permanent home. Interest in soccer across the US in on the rise. MLS has a contract with ESPN and the English Premier League is televised nationally on NBC. A recent Gallup Poll shows soccer as the second most popular sport behind football among the 18-34 demographic in the US.  The attendance for the Colombia – Brazil matches also shows the potential for soccer in our market. I don’t know if Inter Miami seats will be selling for $345 on StubHub any time soon, but MLS appears to be thriving.  Personally, I’m a baseball and football guy. But if Beckham and Mas can put together a winning organization which fields a winning team, pro soccer in South Florida will finally be a success.