Miami With A Twist Of Lime – Mass Transit, Micro Mobility and Their Impact on South Florida 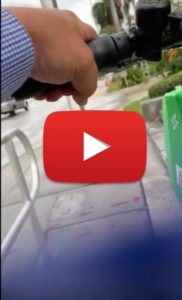 Ken scooters from One Financial Plaza to Fort Lauderdale Brightline Station. At 6x Speed so 10 MPH looks like 60 MPH. No GoPro – just an iPhone and a shirt pocket!

Until very recently, I never thought I’d be using South Florida and mass transit in the same sentence. But through a combination of the latest mobile technology, cooperation between the public and private sectors and some serious investment capital, I am on my way from my Downtown Fort Lauderdale office to an event in Downtown Miami at 80 mph on Brightline. Brightline is the fastest, most stress-free route from Downtown Fort Lauderdale to Downtown Miami or West Palm. But getting to the station – the last mile – has been the biggest problem. Enter the Lime scooter – app-operated and perhaps a bit dangerous, but a great solution for the last mile. Trains and e-scooters are a formidable combination when it comes to improving mass transit in South Florida. This is Miami with a Twist of Lime. (Continued below slide show)

Perfect - a scooter right outside my office lobby 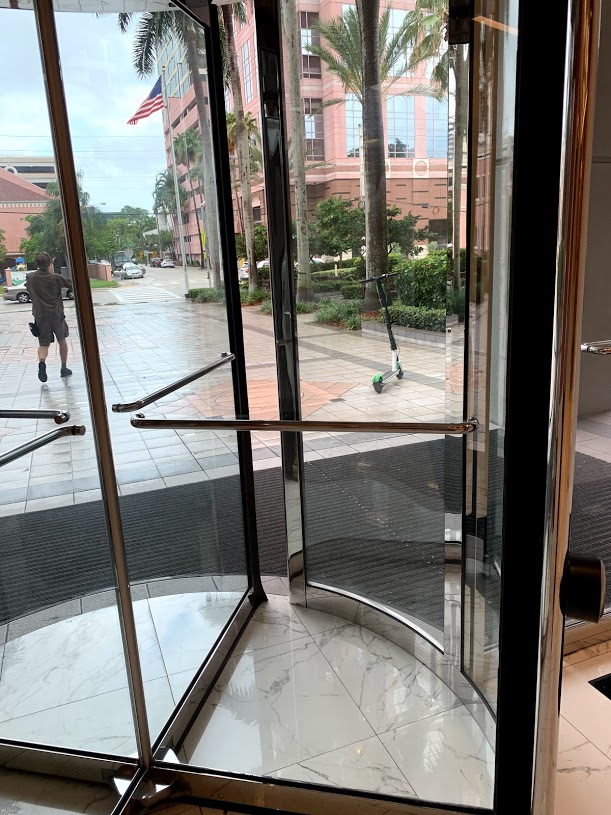 The Lime Scooter and its “micro mobility” competitors Bolt, Bird, Jump and Gotcha are two-wheeled electric versions of the original foot-powered razor scooters. They are now available in many areas of South Florida, including Downtown Miami and Fort Lauderdale as well as Coral Gables and Coconut Grove. The Lime app is very intuitive and easy to use. Each e-scooter is GPS enabled, so the app will show you the locations of all available vehicles. You will need to add some money to your account (there are also some good promo codes for new riders), you then scan the QR code on the handlebars to unlock the scooter, jump on, get it moving Flintstone style, and then hit the throttle to reach speeds of up to 10 mph. It costs a dollar to unlock the scooter and then 15 cents per minute. When you reach your destination, lock the scooter on the app, use the kickstand and leave it in a safe place (please – otherwise it can get messy). The City of Fort Lauderdale allows Scooter operation only on sidewalks and you do need to yield to pedestrians. Lime is also a green solution which further enhances its appeal. A new innovation is the ability to hire a Lime scooter through the Uber App.  Lyft scooters are also now available in Miami.  In addition, General Provision, a Fort Lauderdale coworking operator is offering Gotcha scooter credits as part of their membership.

Are you taking your life in your hands? Maybe. I ran into one of South Florida’s most influential economic development officials during the recent eMerge Americas conference on Miami Beach, who was on crutches for a hip fracture. “I clipped a stop sign on a scooter,” he said. “Not sure why it was on a sidewalk.” He did still believe that the scooters are one viable solution to our transit needs. But please be careful out there. 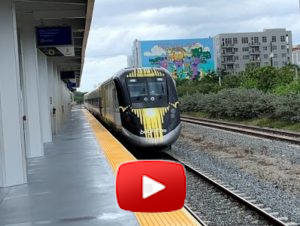 Excited to try a scooter? Petrified? Wait, I’ve got another great solution. True to its name, Freebee is an ad-supported electric car service that costs nothing. You can request a ride via their app, and you can go anywhere within a defined area for free. My Freebee operated within downtown Fort Lauderdale and was great to get from a restaurant to a show at the Broward Theater. It was also a great alternative to the scooter in the rain. The car was kind of a mutated offspring of a golf cart and a Prius wrapped in a Bacardi ad (coincidentally Bacardi with lime). Freebee also operates in areas like Coral Gables, Coconut Grove, Miami Beach and Doral. Please tip your drivers!

For about a $2 Lime ride or a small tip to a Freebee driver, I can do the half-mile trip from my Downtown Fort Lauderdale office to the Brightline station in less than 10 minutes. From there, the trip on Brightline is a pleasure. Brightline is the first privately built passenger train venture in the US. It was started by Florida East Coast Railroad and was recently purchased by a group that includes Richard Branson and will be rebranded as Virgin Trains. It presently connects a 70-mile stretch between Miami, Fort Lauderdale and West Palm Beach and will eventually be expanded to Orlando, Tampa and beyond. The prospect of an easy connection from the cruise ships at the Port of Miami and Fort Lauderdale’s Port Everglades to Orlando’s Theme Parks is great for tourism and the connection between downtown, Miami, Fort Lauderdale and West Palm Beach is great for business. 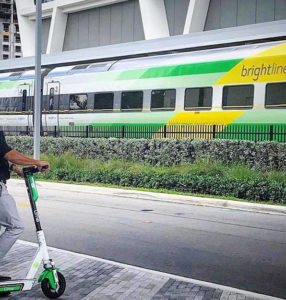 Lime and Brightline – Mass Transit and Micro Mobility are a formidable combination.

The ride is luxurious, the Wi-Fi is great and it gives me the opportunity to blog from a luxury coach when I would have been fighting traffic on a rainy South Florida morning. It’s a 36 minute ride to Miami Central which is super convenient as my event is at the Two Miami Central Office Building, located above the Brightline/Virgin Terminal. It would been 47 minutes to drive according to Waze. With the rain and parking it would probably be a lot longer and certainly a lot more stressful. The round trip on Brightline cost $18 with the handy BEBRIGHT promo code plus $4 for the Lime Scooter round trip. This compares to around $6 in gas, $10 in parking and $5 in wear and tear on the car at a conservative $0.10 per mile. So we’re already about even, and add over an hour of productive time to my day and it’s a no-brainer.

In Miami, the last mile is a bit easier thanks to Miami’s free Metromover service which is an elevated train connecting Downtown Miami, Brickell Avenue and the Omni Arts district. Metrorail, a paid elevated train extends to Miami airport and South Miami-Dade County. Later this year, we will see further enhancements as Tri-Rail will add service connecting West Palm Beach and Fort Lauderdale to Downtown Miami. It is more of a local compared to the Express service by Brightline.

So where do we go from here? Most South Floridians are still a long way from abandoning their cars, although I have met a few entrepreneurs in Miami who have. I first encountered Lime with their dockless bike service in Seattle two years ago. They are now offering Lime Pods, a car-sharing service in Seattle which will likely be heading our way. The jury is still out on the scooters. Safety concerns and the problem of keeping the scooters parked in an orderly fashion will continue to be challenges. But are we better off than we were a year ago? Absolutely. The last mile will continue to be the biggest challenge to getting cars off the streets, but autonomous cars are already here and will only be getting better. The Miami Metromover already operates without drivers. Some residential developers in Miami are offering transit vouchers in lieu of parking spaces to renters. Fort Lauderdale recently rejected $73 million in grant for the Wave Streetcar as many, including myself felt it was obsolete before it was constructed. Freebee and Lime are already picking up the slack and not costing the city a dime.

That brings me to one of the key takeaways to come out of the 2019 Miami Office Market Report event that I attended via Brightline and Lime. The top amenity being requested by tenants today is access to mass transit. One of the sponsors of the event, law firm Carlton, Fields recently leased 50,000 sf at Two Miami Central choosing access to transit over bay views. Akerman, another major law firm recently located to Brickell City Centre which has its own Metromover stop, again choosing access to transit as well as 500,000 sf of shops and restaurants over a traditional Brickell address.

Mass transit may never be as important to South Florida as it is to markets like New York and Chicago, but we have certainly made progress. It won’t be a matter of expanding mass transit to reach more people, it will be a matter of developing projects along the routes to bring people in. Shorenstein Properties just placed a $159 million bet in acquiring the Two and Three Miami Central Office buildings. Thousands of new residential units are also under development along Brightline’s path as millenials continue to urbanize. When we add accessibility by scooter, thousands more residents and businesses will be within minutes of the Brightline and soon Tri-Rail Routes. I believe consumer demand for authentic, transit-oriented, walkable and now scooterable neighborhoods will be the most important factor shaping the growth of our market in the coming years.

So it’s time to jump on your scooter, be very careful, park it responsibly; and as they say on Brightline: enjoy your care-free car free experience.