Leasing, Sustainability and Why My Glass of Buffalo Milk is Half Full – Happy Holidays!

I am writing my special holiday edition of KensTrends from Luang Prabang, Laos. While my usual blog involves office leasing, today I cover the slightly more obscure topic of buffalo leasing.  I am in Laos visiting my daughter Amanda who is on a fellowship through Princeton in Asia as a festival coordinator for The Luang Prabang Film Festival. 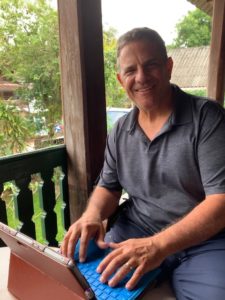 Blogging from the balcony of our room in Luang Prabang

While Luang Prabang was not on my bucket list of preferred vacation destinations, it probably should have been.  It has become increasingly popular since being named a UNESCO World Heritage Site in 1995. It’s only been 2 days since we arrived and it’s already been an amazing experience. I wanted to pass along some thoughts on technology and sustainability that may make you feel a little better about the future.

My daughter’s roommate in Laos works at the Laos Buffalo Dairy. Since Amazon delivers to Boca Raton but not to Laos, we were asked to bring out supplies to  help them in their cheesemaking. The dairy has quickly become one of the top attractions in Luang Prabang.  It is located 30 minutes from the city on the road to the Kuang Si Waterfall, one of the most beautiful in the world. On the way back from visiting the waterfall, we were treated to a VIP tour of the dairy with Rachel O’Shea, one of its founders. The dairy has only been open for about 3 years, but they are doing some great work. 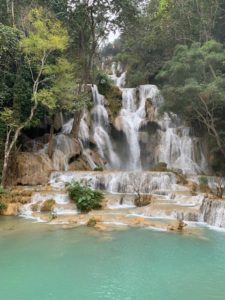 The concept behind the dairy is to lease buffalo from their local owners. The dairy feeds, vaccinates, cares for and breeds the buffalo. For generations, Lao farmers have been raising  buffalo for their meat, but they never considered milking them. Enter in a group of American and Australian cheese lovers who were frustrated with importing expensive French cheeses into Laos and learned  how to milk buffalo on Youtube. One buffalo can generate its owner around $1500 in rental  income, about equal to the average annual income in Laos. I didn’t ask whether it was a net or gross lease and have no idea about buffalo cap rate trends. 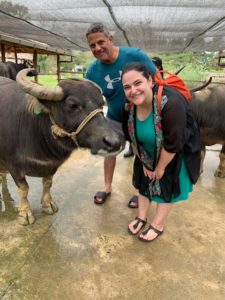 Ken, Amanda and Lola the most photogenic water buffalo in Laos. 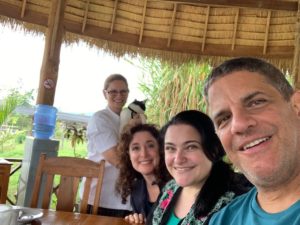 The family with Rachel, one of the founders of the Dairy

Lisa with our new friends at Mandalao.

But as my daughter explains it, owning a buffalo in Laos is like winning the lottery.  And sustainability creates a win-win scenario. Give a man a fish he eats for a day, teach a man (or woman) to fish, he eats for a lifetime. But this is even better. The dairy covers the cost of medicine and vaccinations which are often too costly for the locals. This reduces the mortality rate. And the dairy has been able to reduce inbreeding and has introduced crossbreeding to strengthen the herd. The buffalo population is now growing, milk yields are up, and the dairy is providing outreach to the villages. Many local children are malnourished on a diet consisting primarily of rice which lacks protein. By teaching the locals to boil the rice in buffalo milk, the Lao children get a chance at a healthier, more productive life. And the founders get to satisfy their cravings for buffalo mozzarella, ricotta and feta which we were also able to sample. The ice cream was also outstanding and I hear the cheesecake is too. We saw another example of sustainability at the Mandalao Elephant Sanctuary. Laos, known as the land of a million elephants is now down to only around 1,000 and the population was decreasing by 5 percent annually due to poaching and habitat reduction. With the help of the World Wildlife Fund and groups like Mandalao, the population is beginning to increase. Instead of getting to ride the elephants which is harmful, visitors to Mandalao get to experience these incredible creatures in their natural habitat. Elephants like to eat, to walk and to play and we got to join the elephants in those activities. It is important to avoid the dangerous back legs of the elephant and you certainly need to watch were you step. (A sustainable skill my wife Lisa and I learned the hard way in Boca Raton’s Canine Cove dog park) 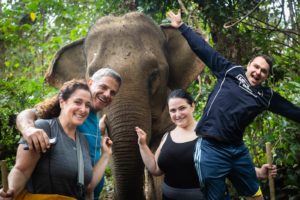 We had to photoshop in our one missing family member who had to stay behind in Seattle. Michael is the one in the blue shirt, not the one with the big ears. Happy holidays from our family.

So maybe the moral of the story is that sustainability is not an either-or proposition. Rachel can have her cheese and eat it too. She can lease buffalo and sell the cheese to Luang Prabang’s new 5-star hotels while helping children and improving the standard of living for the Lao villagers. Rachel is also raising pigs using a litter made from rice husks, a waste product which is usually burned. The “piggie litter” is then used to fertilize the grass that is fed to the buffalo. Another initiative at the dairy is teaching the locals to breed rabbits as an alternative protein source. The advantage of rabbits is that they breed…like rabbits. Technology is also helping reverse the decline of the Lao and Thai elephant population. Back in Boca, I recently did an office space tour in my client’s Tesla. It is sportier, faster and more luxurious than just about anything on the road. It runs without gas, and the latest models are getting more and more affordable. Yes, we have problems and we do need to acknowledge them. But it is our modern technology that provides the hope for a solution. There are some major hurdles to overcome, but for now, my glass of buffalo milk is half full. Happy Holidays from KensTrends and the Silberling family. And as our clocks are 12 hours ahead of yours on the east coast, let me be the first to wish you a Merry Christmas and a Happy New Year. You can click on the links on the blog to find out more about visiting, contributing or investing in the Laos Buffalo Dairy and Mandalao Elephant Sanctuary. 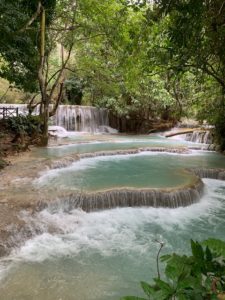 Can’t get enough of Kuang Si – amazing the Floridians were the only ones crazy enough to jump into the cold water.

And don’t forget to visit Truss.co,  we can’t lease you a buffalo…yet, but we are the smartest fastest way to find office, coworking, industrial or retail space.